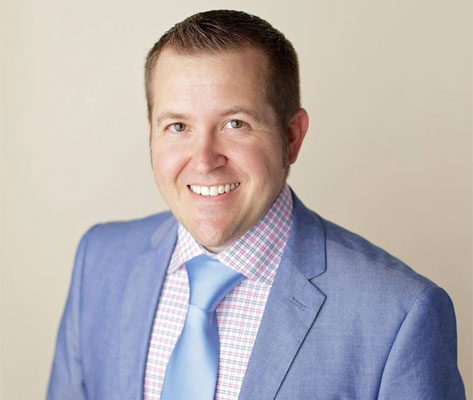 After joining the workforce for more than a decade, the last six years in Information Technology at Texas A&M, Dr. Stewart enrolled at the University of Texas School of Dentistry (UTSD) to pursue his childhood dream of being an orthodontist.  During dental school he was selected as the sole representative of UTSD for the American Dental Association Foundation Predoctoral Dental Student Scholarship, for which he was the only recipient from the state of Texas.

Dr. Stewart was inducted into Omicron Kappa Upsilon National Dental Honor Society and graduated in the top 6% of his class as a Doctor of Dental Surgery.   He then completed his orthodontic residency and Masters of Science in Dentistry at Colorado University.  He became a Board Certified Orthodontist before starting at Stewart Elms Orthodontics.

Dr. Stewart and his wife Megan have called College Station home since they were freshmen at A&M.  Both of their daughters, Addisen and Tenley, were born here before the family started their dental and orthodontic school journey.

Dr. Stewart and his wife have been longtime members of Grace Bible Church where they were married in 2004.  Before leaving for dental school, the Stewarts served in various roles at Grace.  They were class coordinators for the Newlywed Young Married Class before moving to help start the Southwood Campus.  Megan worked as the Grace Kids Elementary Coordinator at Southwood.  After serving as a worship leader throughout and after college, Dr. Stewart was a member of the Southwood Worship Band where he played mandolin, acoustic guitar, and sang background vocals.

The Stewarts love Pine Cove Christian Camps.  Dr. and Mrs. Stewart met while working at the Towers, got engaged there, and Dr. Stewart worked full time at Pine Cove after graduating from A&M.  Since starting dental school, the Stewarts have returned to the Pine Cove Woods Family Camp every summer to focus on the Lord and reconnect as a family.

Dr. Stewart’s favorite activity is snow skiing.  Attending residency in Colorado allowed him to share his love of skiing with his family, as it was the first time his daughters had the chance to ski.  Now they’re a skiing family and enjoy hitting the slopes as often as possible.

Dr. Stewart grew up hunting and fishing.  Now that he’s back home, he looks forward to pursuing those adventures again.  He grew up going to the deer lease in West Texas every other weekend during the fall and summers were spent bass fishing around home and chasing speckled trout and redfish in the gulf.  Some of his fondest memories were made in the great outdoors, including an elk hunting trip with his dad in Colorado, sailfishing in Costa Rica with his dad and brother, and asking his future father-in-law Travis for his blessing to propose to Megan while catfishing. Thankfully Travis said yes and didn’t throw Dr. Stewart out of the boat!  He’s now one of Dr. Stewart’s favorite fishing buddies.

The entire family is ecstatic to be home in College Station, live in this wonderful community, and be a part of the amazing team at Stewart Elms Orthodontics!